What they hate in you, is missing in them.

What they hate in you, is missing in them. Keep shining. 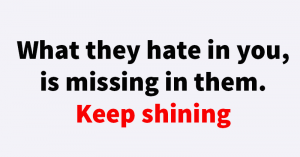 They hate you because, their TITLE don’t carry the same weight as your INFLUENCE! – Unkow.

Pay no mind to those who talk behind your back, it simply means that you are 2 steps ahead

You gotta go hard, you gotta belive in your self. you gotta have a sence of humor to know that bulshit is gonna happen, you can’t be too serious about it or too emotional and fake when the bulshit happen. you gotta just stick to the script belive and have overwhelming confidence. Be your own biggest fan, your own biggest beliver and put it on you back and carry the bag.