This Is Why Dogs Spin Around Before They Poop

Your dog’s internal compass could be guiding it. 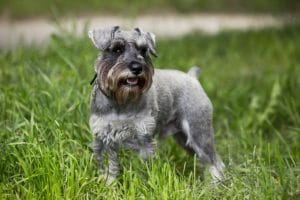 Most dog owners have probably been puzzled (and possibly impatient) waiting for their dog to do its business. Instead of just finding a soft area of grass to go number two, they make a whole ritual out of it, spinning in a circle before finally squatting. Luckily, the ultimate pet owners’ question may finally have been answered.

A few theories have circulated about why dogs might circle before pooping, and most are similar to the reasons they spin before lying down. Trampling around in a circle would flatten the grass around, which would keep tall blades from trapping their waste and hitting their tushes while they poop (yuck). Another explanation could be that they’re scanning for snakes and predators before they become completely occupied.

But Czech researcher Hynek Burda didn’t quite buy into those theories. Dogs evolved from wolves, which didn’t need to worry much about tall grass. And if they were scanning their environment, keeping still to listen and sniff would be more effective than giving the area a quick once-over. Instead, Burda suggested that dogs spin to get a feel for the Earth’s magnetic pull. Here are 16 more ways your dog is smarter than you think.

The Earth has a magnetic field around it protecting it from radiation from space, and some animals seem to use it to get a sense of where its North and South poles are. For instance, it’s how birds know which way to migrate. In 2013, Burda published a study in the journal Frontiers in Zoology suggesting dogs have a strong internal compass, too. He and his team spent two years watching 70 dogs poop and pee and recording which way they faced and how strong the magnetic field was. (And when they’re done, this is why dogs kick up the lawn after they pee.)

As it turns out, when the magnetic field was calm (which it is about 20 percent of the time when it’s light out), dogs preferred to poop facing either north or south. When the magnetic field was less stable, they faced any ol’ way. The pattern couldn’t explain why dogs like facing the Earth’s poles, but the researchers think it might help them remember where they marked their territory. “Doing so, and/or calibrating his magnetic compass, is probably easier for him when being aligned with the magnetic field,” Burda told the Washington Post.

If they can remember which way they were facing, they might find it easier to find that spot again. So before you roll your eyes when your dog takes ages to do his business, remember that Fido might just be getting scientific about his potty spot. For more weird dog habits, check out the 12 secrets your dog’s tail is trying to tell you.