Sometimes sorry is the most difficult thing on earth

Sometimes saying SORRY is the most difficult thing on earth….. But its the Cheapest thing to save the most expensive gift called Relationship..♥ 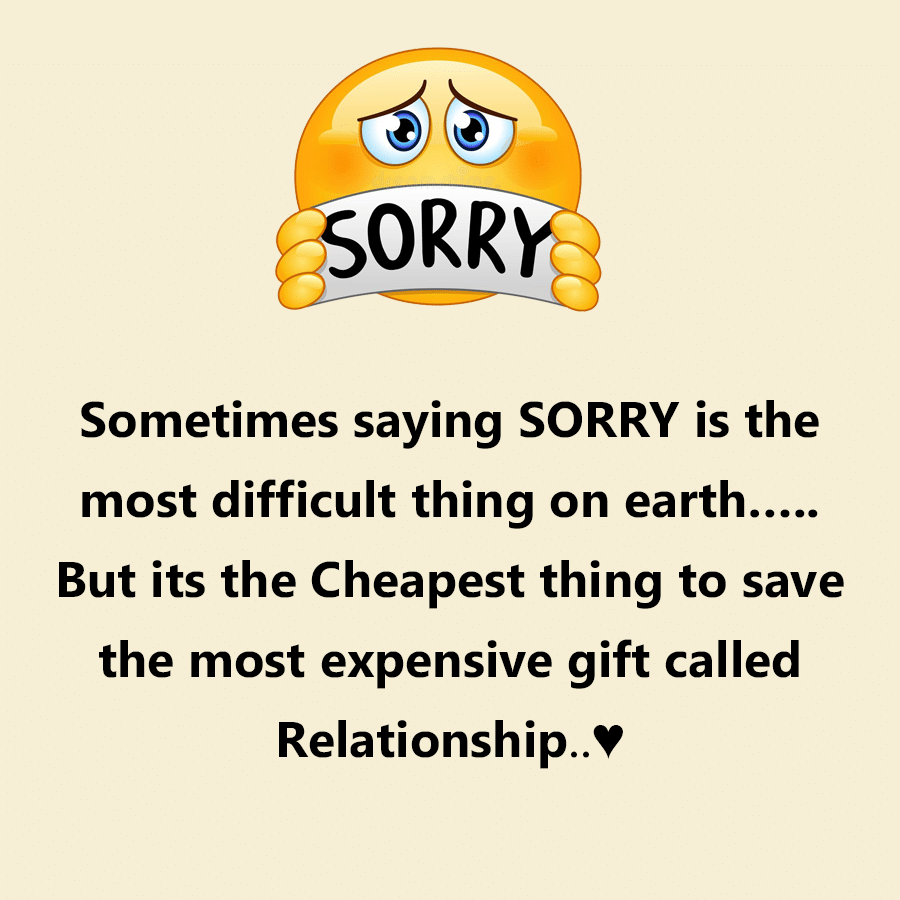 An apology is a lovely perfume; it can transform the clumsiest moment into a gracious gift.” – Margaret Lee Runbeck

“In this life, when you deny someone an apology, you will remember it at time you beg forgiveness..” – Toba Beta

“An apology is a good way to have the last word.” – Unknown

“Never make a defense or an apology until you are accused.”– King Charles I

“The only good thing about punctuality is that it usually gets you an apology.”– Unknown

““Would ‘sorry’ have made any difference? Does it ever? It’s just a word. One word against a thousand actions. – Sarah Ockler

“I am the wisest man alive, for I know one thing, and that is that I know nothing.”– Plato

“Never forget the nine most important words of any family-
I love you.
You are beautiful.
Please forgive me.”– H. Jackson Brown Jr.

“Never apologize for showing your feelings. When you do, you are apologizing for the truth.”– Jose N. Harris

“An apology is the super glue of life. It can repair just about anything.”– Lynn Johnston

“My life is an apology for the life of my father.”– Kristin Cashore

“I’m sorry.’ The two most inadequate words in the English language.”– Beth Revis

“An apology given just to appease one’s conscience is self-serving and better left unspoken!”– Evinda Lepins

“Faithless is he that says farewell when the road darkens.”– J.R.R.Tolkien

“Sacrifice is at the heart of repentance. Without deeds, your apology is worthless.”– Bryan Davis

“An apology can be a wonderful thing so long as it is infrequent and from the heart. However, beware of the person who justifies bad behavior with apologies. For them it is a means to an end, and quite often at your expense.”– Gary Hopkins

“An apology for the devil: it must be remembered that we have heard one side of the case. God has written all the books.”– Samuel Butler

“An apology might help, but you can change your life without one.”– Robin Quivers

“A hero is someone we can admire without apology.”– Kitty Kelley

“It will never do to plead sin as an excuse for sin, or to attempt to justify sinful acts by pleading that we have an evil heart. This instead of being a valid apology, is the very ground of our condemnation.”– Archibald Alexander

“Nothing wrong with apologizing, but saying I’m sorry does nothing when you continue to make the same mistakes..”– Unknown

“Some people accidentally walk on your feet and apologize, while others walk all over your heart and don’t even realize.”– Unknown

“In some families, please is described as the magic word. In our house, however, it was sorry..”– Margaret Laurence

“Saying sorry to someone is hard… but putting your pride down for someone is the hardest.”– Cristina Orante

“A person can apologize endlessly, and even if you forgive them, sometimes you can’t forget the pain they’ve caused you.”– Nishan Panwar

“Never apologize for having high standards. People who really want to be in your life will rise up to meet them..”– Suman Rai

“Any good apology has 3 parts: 1)I’m sorry 2)It’s my fault 3)What can I do to make it right? Most people forget the third part.”– Unknown

“You can always say sorry, But the real apology is when you hear the sadness in their voice and see the look in their eyes. And you realize that they have hurt themselves just as much..”– Kid Cudi

“I understand the concept of being the bigger person but I do not understand why some people apologize to others when they weren’t wrong.”– Unknown

“Forgiveness does not change the past, but it does enlarge the future.”– Paul Boese

“True friends stab you in the front.”– Oscar Wilde