Learning to Say No

Have you ever felt awkward when someone asked for help? You are not really ready to help them, you don’t really want to help, but it’s hard to say “No”. What would you do before that situation?

The more you can say “no” to other people’s things you don’t want to do, the more time you’ll spend with yourself, meeting people you want to meet, going places you want to go, or satisfying things His own passion.

Hopefully, these quotes will illuminate why it is easy for some, virtually impossible for others, but important for all nonetheless. That saying so if not the end of the earth, but perhaps the end of being walked over, and of missing out on the opportunities that you want and should be saying yes too. 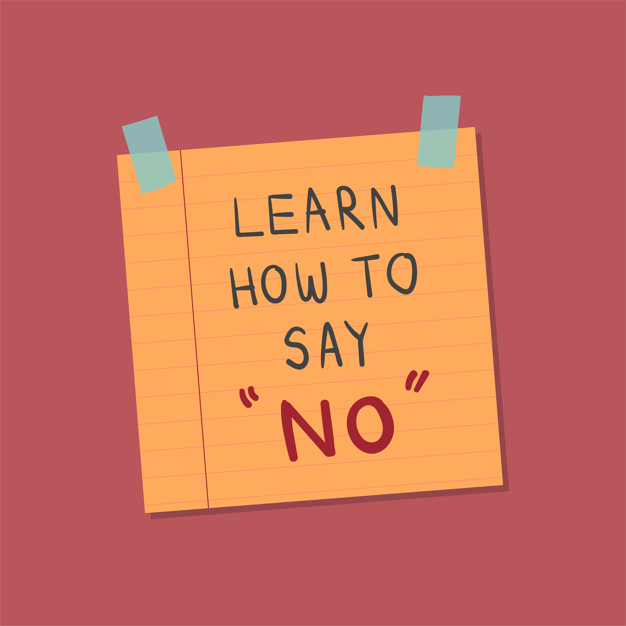 Top Tips for Saying No

Keep your response simple. If you want to say no, be firm and direct. Use phrases such as “Thanks for coming to me but I’m afraid it’s not convenient right now” or “I’m sorry but I can’t help this evening.” Try to be strong in your body language and don’t over-apologize. Remember, you’re not asking permission to say no.

Buy yourself some time. Interrupt the ‘yes’ cycle, using phrases like “I’ll get back to you,” then consider your options. Having thought it through at your leisure, you’ll be able to say no with greater confidence.

Consider a compromise. Only do so if you want to agree with the request, but have limited time or ability to do so. Suggest ways forward to suit both of you. Avoid compromising if you really want or need to say no.

Separate refusal from rejection. Remember you’re turning down a request, not a person. People usually will understand that it is your right to say no, just as it is their right to ask the favor.

Don’t feel guilty for saying no to your children. It is important for them to hear no from time to time so that they develop a sense of self-control. It is hard to negotiate adult life without this important skill. Rather than cave in to their protests, let them know who is in charge by setting boundaries.

Be true to yourself. Be clear and honest with yourself about what you truly want. Get to know yourself better and examine what you really want from life.

Here are some Quotes about “Learning to Say No”

1. “Half of the troubles of this life can be traced to saying yes too quickly and not saying no soon enough.”- Josh Billings

2. “Let today mark a new beginning for you. Give yourself permission to say NO without feeling guilty, mean, or selfish. Anybody who gets upset or expects you to say yes all of the time clearly doesn’t have your best interest at heart. Always remember: You have a right to say no without having to explain yourself. Be at peace with your decisions.”- Stephanie Lahart

3. “If you want more time, freedom, and energy, start saying no.”- Anonymous

4. “The oldest, shortest words – ‘yes’ and ‘no’ – are those which require the most thought.”- Pythagoras

5. “One key to successful relationships is learning to say no without guilt, so that you can say yes without resentment.”- Bill Crawford

6. “When you say yes to others, make sure you are not saying no to yourself.”- Paulo Coelho

7. “You have to decide what your highest priorities are and have the courage pleasantly, smilingly, and non-apologetically – to say no to other things. And the way to do that is by having a bigger yes burning inside.”- Stephen Covey

9. “Learn to say no in situations where saying no can be difficult, where it could mean getting fired. Say no anyway, because it could lead you to greater opportunities.”- Samuel Dash

10. “Say no to everything, so you can say yes to the one thing.”- Richie Norton
11. “There are often many things we feel we should do that, in fact, we don’t really have to do. Getting to the point where we can tell the difference is a major milestone in the simplification process.”- Elaine St. James

12. “I refuse to please others at the expense of my emotional well-being. Even if it means saying no to people who are used to hearing yes.”- Anonymous

14. “Learning to just say no to emotional reactions isn’t repression. Saying no means not engaging the frustration, anger, judgment, or blame. Without engagement, you won’t have anything to repress.”- Doc Childre

15. “You don’t have to accept things you are not okay with.”- Anonymous

16. “People think focus means saying yes to the thing you’ve got to focus on. But that’s not what it means at all. It means saying no to the hundred other good ideas that there are. You have to pick carefully. I’m actually as proud of the things we haven’t done as the things I have done. Innovation is saying no to 1,000 things.”- Steve Jobs

17. “It takes true courage and real humility to say no.”- Ernest Agyemang Yeboah

18. “No is a complete sentence. It does not require an explanation to follow. You can truly answer someone’s request with a simple no.”- Sharon E. Rainey

19. “Sometimes no is the kindest word.” –Vironika Tugaleva

20. “You can be a good person with a kind heart and still say no.”- Lori Deschene

21. “Learn to say no; it will be of more use to you than to be able to read Latin.” –Charles Spurgeon

22. “You don’t have to stay committed to something just because you’re good at it.”- Brittany Burgunder

24. “The ability to say no is a tremendous advantage for an investor.”- Warren Buffett

27. “You have a right to say no. Most of us have very weak and flaccid no muscles. We feel guilty for saying no. We get ostracized and challenged for saying no, so we forget it’s our choice. Your no muscle has to be built up to get to a place where you can say, I don’t care if that’s what you want. I don’t want that. No.”- Iyanla Vanzant

28. “Say no to the things that confine you to a life of mediocrity.”- ATGW

29. “Part of the skill of saying no is to shut up afterward and not babble on, offering material for an argument.”- Judith Martin

32. “Give yourself the permission to say no to anything that makes you unhappy or drains your energy.”- Anonymous

35. “It’s only by saying NO that you can concentrate on the things that are really important.” – Steve Jobs

36) “Let today mark a new beginning for you. Give yourself permission to say NO without feeling guilty , mean, or selfish, Anybody who gets upset and/or expects you to say YES all of the time clearly doesn’t have your best interest at heart, Always remember: You have a right to say NO without having to explain yourself, Be at peace with your decisions.” — Stephanie Lahart

37) “You have to learn to say no without feeling guilty, setting boundaries is healthy. You need to learn to respect and take care of yourself.” — Unknown

40) “Saying yes to happiness means learning to say no to the things and people that stress you out.” — Thema Davis

41) “When you say YES to others, make sure you are not saying NO to yourself.” — Paulo Coelho