A pretty face gets old,
A nice body will change,
But a good woman will always be a good woman. 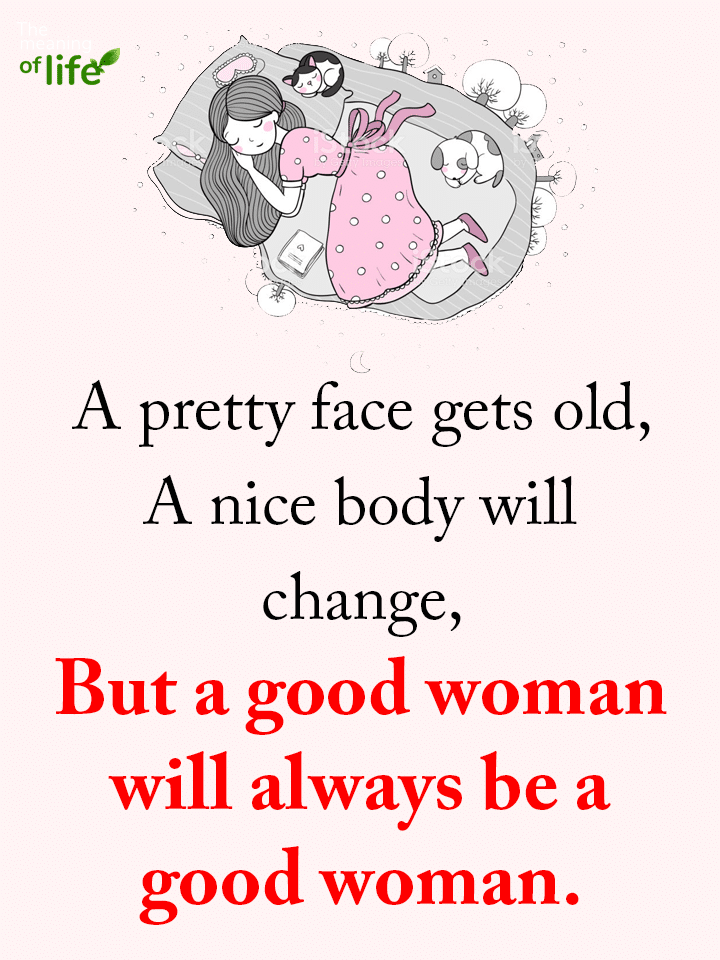 1) There are few women whose charm survives their beauty. – FranÃ§ois de La Rochefoucauld

2) You can be an absolute woman and also be smart and tough and not lose your femininity.- Priyanka Chopra

3) Women are wiser than men because they know less and understand more. – James Thurber

4) Women are never so strong as after their defeat. – Alexandre Dumas

5) A woman is the full circle. Within her is the power to create, nurture and transform. – Diane Mariechild

7) Women are in league with each other, a secret conspiracy of hearts and pheromones. – Camille Paglia

8) A woman can’t do anything about her appearance. Either she’s pretty or she isn’t. But her character is quite another matter.

9) A good woman’s arms round a man’s neck is a lifebelt thrown out to him from heaven.

10) Most good women are hidden treasures who are only safe because nobody looks for them.

11) Find a woman who makes you feel more alive. She won’t make life perfect but she’ll make it infinitely more interesting. And then love her with all that’s in you.

12) Marry a good woman, and be happy the rest of your life. Or, marry a bad, and become a good philosopher

13) Woman is sacred; the woman one loves is holy.

14) If a woman is successful, she’d better duck, because they’ll be out to get her.

15) Honor a good woman because she is virtuous and honorable. – Delano Johnson

16) Don’t take a good woman for granted. Someday, someone will come along and appreciate what you didn’t. – Darkskin

17) A good woman is like a tea bag. You never know how strong she is until she gets in hot water. – Eleanor Roosevelt

18) No man succeeds without a good woman behind him. Wife or mother, if it is both, he is twice blessed indeed.- Harold MacMillan

19) One should never trust a woman who tells her real age. If she tells that, she’ll tell anything. – Oscar Wilde

20) Women are seldom silent. Their beauty is forever speaking for them. – Philip Moeller

22) A good woman inspires a man, a brilliant woman interests him, a beautiful woman fascinates him, but a sympathetic woman gets him. – Helen Rowland

23) Women are made to be loved, not understood. – Oscar Wilde

26) A sensible woman can never be happy with a fool.- George Washington

27) A woman is the full circle. Within her is the ability to create, nurture, and transform. – Diane Mariechild